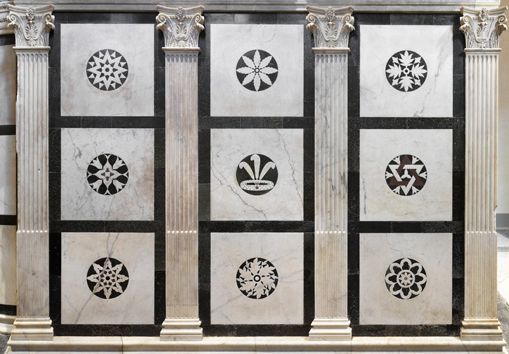 Above: Detail of the marble inlay on the exterior walls of the Rucellai Sepulcher 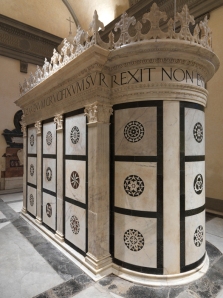 The Rucellai Sepulcher, designed by Leon Battista Alberti, is a small funerary chapel and, similar to the Old Sacristy in San Lorenzo, is meant to imitate the design of the Holy Sepulcher in Jerusalem. In his text On the Art of Building in Ten Books, Alberti describes his theories regarding ratio and proportion, placing emphasis on the symbolic and aesthetic values of architecture over its practical aspects. Alberti believed it was important to use ratio as a way to express cosmic harmony through the proportions and design of a structure. The Rucellai Sepulcher, and the marble designs upon it’s exterior, are carefully planned according to these theories.

The designs of the 30 marble inlaid squares that adorn the exterior walls of the sepulcher reference organic symbols such as leaves of laurel and oak, as well as geometric forms such as the eight and six-pointed star. The center square panel of each wall features designs that represent the emblems of the families related to the Rucellai, notably the Medici. Here, Alberti uses symbolism and abstraction to convey both social and theological messages. The symbolic meaning of the representations of various plant leaves would have been well understood by the patron. For example, oak leaves served to represent strength and nobility, and laurel suggested peace and victory. The more enigmatic geometric symbols were likely linked with mathematical, astrological, and theological emblems derived from Alberti’s hermeneutical studies. The chapel itself, as a proportional likeness of the Holy Sepulcher in Jerusalem, is also emblematic.

In the Rucellai Sepulcher we see the unficiation of the organic, both symbolically and physically manifest in the marble, with the sciences, here again both metaphorically and physically in the visual emblems and in the formal structure of the building. We know that the Neo-Platonists believed that God emanated through all aspects of the earth, and this structure reflects this understanding.

Nagel, A. (2011). The controversy of Renaissance art. Chicago: The University of Chicago Press.